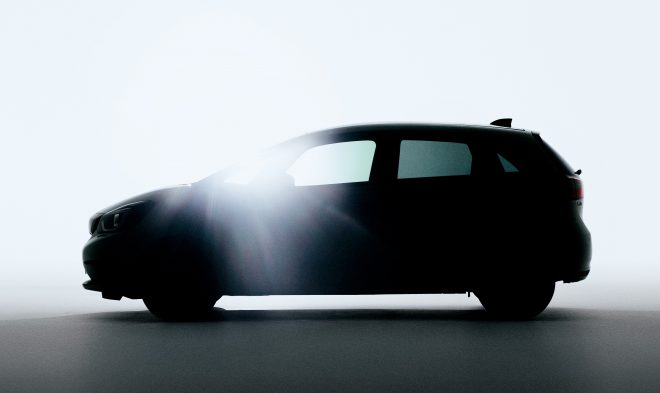 Honda Jazz teased ahead of next week’s Tokyo Motor Show.

Ahead of its reveal next week at the Tokyo Motor Show, Honda has teased us with a glimpse of the next-generation Honda Jazz hatchback.

Honda says the new Jazz will “raise the bar in terms of comfort and driver enjoyment”.

What’s interesting about the new Honda Jazz or Honda Fit is that it will be hybrid-only in Europe.

For the first time on the continent, it will only be available with Honda’s Earth Dreams two-motor hybrid powertrain.

That petrol-electric combination will provide an “exceptional blend of strong and effortless driving performance” and “impressive fuel economy”, Honda says.

With the new model, the company is unlikely to mess with a formula that has made it one of the best-selling hatchbacks around.

In the photos, it still looks like the tall and boxy hatchback that people love it for.

However, the front and rear have had a restyle, including the lights and the bonnet. According to British publication Autocar, Honda will first electrify the little hatchback in 2020, followed by the Honda Civic one year later.

“Ahead of its 2025 electrification goal, Honda will expand the application of its i-MMD dual-motor hybrid system, with the introduction into smaller segment cars an important first step,” Autocar reported the Japanese automaker as saying.

It remains to be seen if we’ll see the Jazz come to Singapore as a hybrid, but chances look good since Europe has strict emissions rules, as does Singapore, which tacks a premium on high-emission cars.