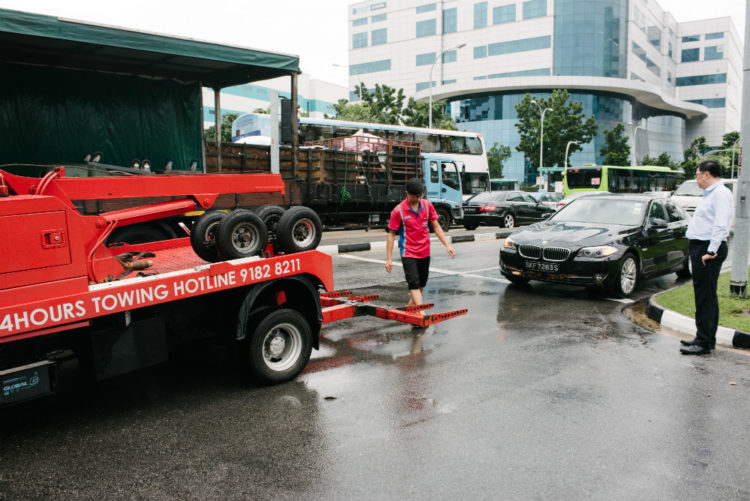 Mr Ricky Ng (right) waiting for his BMW car to be towed after he was caught in Monday’s flood near the junction of Upper Changi Road and Bedok North Avenue 4. “The damage is quite bad as water got into the engine, exhaust and air intake system,” he said.

Despite the flood, 60-year-old Rodney Ham believed he could drive his Mercedes-Benz through the rising waters at the junction of Upper Changi Road and Bedok North Avenue 4 on Monday morning.

But as he was making his move, another vehicle coming in the opposite direction sent water washing over his car’s bonnet.

“Thank God that I was still able to drive about five to 10 metres out of the area. The engine choked a few times and the car stalled,” the managing director of an automation firm told The Straits Times yesterday.

He added that his year-old vehicle had to be towed away, probably to have its engine replaced.

Monday’s intense downpour resulted in flash floods in nine areas on the island, partially submerging cars, flooding the cabins of buses and disrupting some businesses.

BMW driver Ricky Ng, 50, was also caught in the flood. “The damage is quite bad as water got into the engine, exhaust and air intake system. The engine has to be dismantled to be repaired too,” he said.

Garages said flood-damaged cars can cost anywhere between thousands and tens of thousands of dollars to repair, and insurance companies may instead write them off.

Mr Francis Lim, president of the Singapore Motor Workshop Association, said: “Flooded cars are tricky. Electrical components and computers installed in the floorboards and side panels of the cars may also be shorted.”

The floods started at 8.30am and took two hours to subside, keeping towing services busy.

Mr Teo Kian Hock, 57, who runs a towing company under his name, has a fleet of eight trucks that usually assist about 20 vehicles a day. On Monday they helped 40.

Asked if he had been concerned that the tow trucks could have become trapped in the water, Mr Teo said in Mandarin: “Of course we were afraid, but we also have long cables that can be extended to reach the cars, which we used.

“But this is not the worst instance of flooding we have dealt with, as the flood was confined to the roads, which drain easier compared to water entering a building or carpark, which has happened before.”

Changi-based logistics company RichLand was forced to re-route 15 of its delivery vans.

Its human resources manager Fiona Lee said: “We were pretty fortunate as the warehouse is on a slope and the water did not flood into the warehouse. We told our drivers to take a left turn to Bedok North Avenue 4 instead of going onto Upper Changi Road to avoid the flood.”

Ms Margaret Jenkins, who is in her 60s and a receptionist for Kingsmen Creatives in Changi South Lane, said its dispatch biker had to ride on the pavement to avoid the floods, while some staff were forced to park across the road at the Institute of Technical Education (ITE) College East.

“It is the first time since the company moved here 18 years ago that the flooding has been so bad,” said Ms Jenkins.

Classes at ITE College East were not affected.

SBS Transit said that 12 of its buses, which operate routes nine and 10, were affected.

The buses were called back for checks but none was damaged. Go-Ahead said that five of its bus services had been delayed due to the rain. 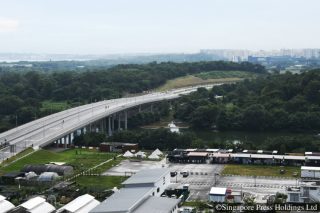