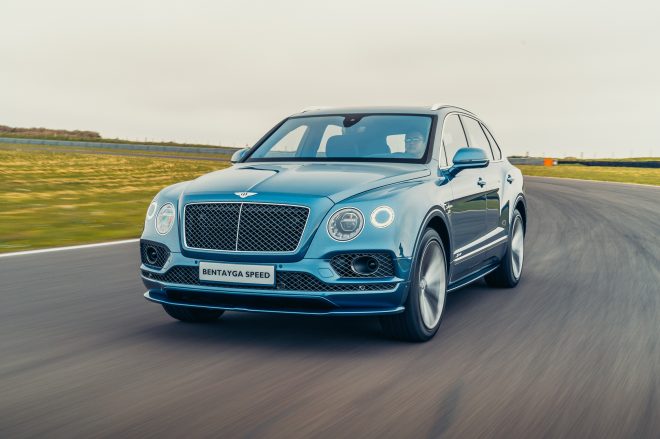 I’m at turn 7 at the picturesque Anglesey Circuit in Wales, pumping the brakes on a hulking Bentley Bentayga Speed and trying frantically to shave off excess speed.

From his voice, it’s clear that my instructor (ex-Bentley racer Guy Smith) is trying quite hard not to give me a tongue-lashing from the passenger seat, but I redeem myself by taking the next straight with a loud bellow of W12.

The Speed simply can’t evade the laws of physics, but it comes darn close to breaking them.

It’s a car which has all the luxury of a nobleman’s house, yet corners far better than one.

Based on the same platform as the third-gen Porsche Cayenne, Audi Q8 and Lamborghini Urus, the Bentley Bentayga Speed, obviously, has great pedigree.

To earn the “Speed” badge, engineers at Crewe revised the software governing the 6-litre W12 to deliver 626hp in the Speed, 26hp more than the standard Bentayga. 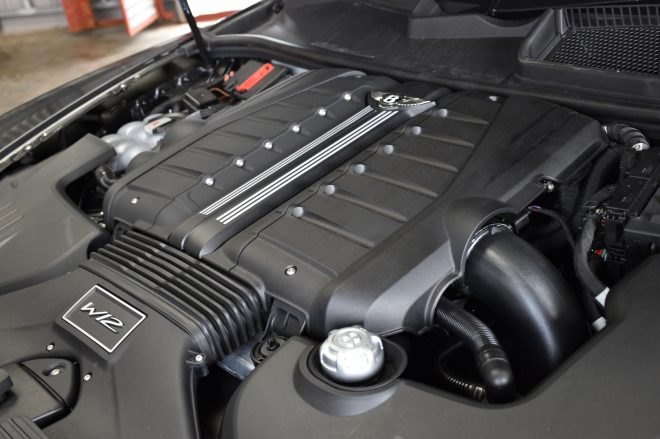 The 900Nm of torque is unchanged but is now available lower in the rev range and across a wider spread.

The Speed retains the electronic differential and dynamic driving modes that all Bentaygas share but has firmer shocks and a louder exhaust note for greater driving pleasure.

It also gets the same Bentley Dynamic Ride system that helps flatten the car in corners, powered by an onboard 48V electrical system.

If Christian Grey ever needed a new car, he could do worse than the Bentayga Speed.

Swathes of leather cover the two upper “swooshes” of the dashboard that divide the driver and passenger sides, while soft Alcantara wraps the lower. Bespoke “Speed” badging on the headrests, passenger side fascia and treadplates, however, reminds you why you paid $1.1 million (without options or COE) for this Victorian house on wheels.

The seats are covered in a similar mix – grippy Alcantara to hold your bottom in place, with leather everywhere else.

All those features add up to a substantial car, quite literally. All in, the Speed weighs 2.5 tonnes. 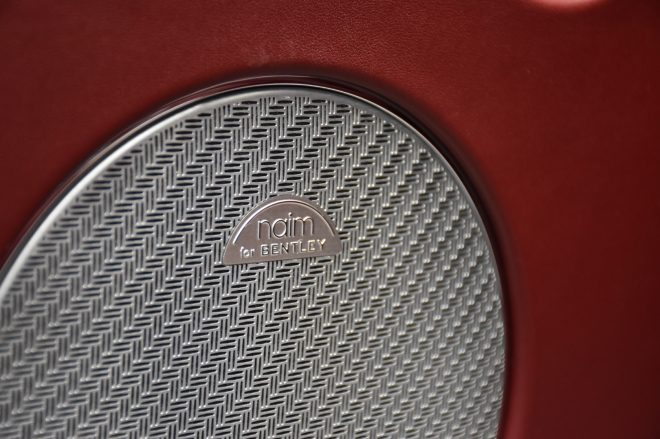 The Naim audio system pumps out close to 2000 watts of power.

On track in the Bentayga Speed 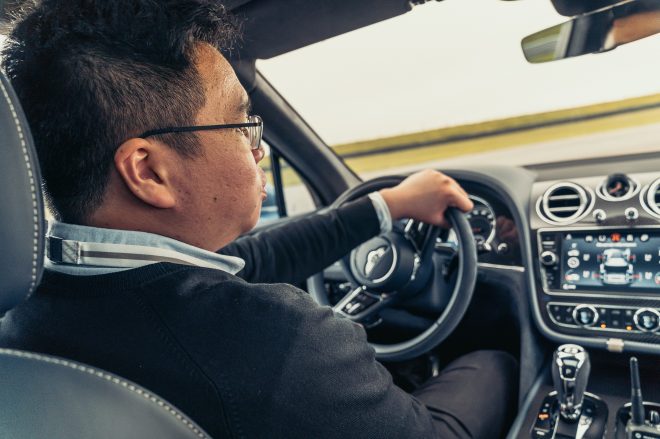 With all that weight, how does the Speed weigh up (pun not intended) on track?

To be sure, its stablemates the Lamborghini Urus and Porsche Cayenne handle miles better, but it’s a testament to Bentley’s engineers that they’ve managed to make the Speed handle as good as it does.

In the balanced “Bentley” mode, the dampers are softer, the engine more reserved.

But twist the silver, knurled dynamic mode dial to “Sport” and the British bulldog awakens. 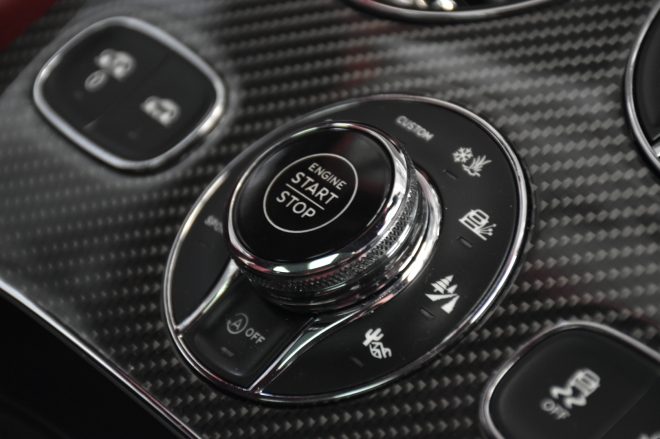 The dynamic driving selector is where the magic happens.

The W12 becomes more responsive to throttle inputs and the exhaust takes on a harder-edged note.

It’s probably similar to what Spitfire pilots in the 1940s must have felt, but lucky for me I’m not being shot at.

Exiting turn 4 on the circuit, I mash my right foot into the plush carpeted floor.

The revs flare and the Speed’s exhaust morphs from a hum to a sharp bark as it picks up speed, taking the long, winding right-hander through turns 5 and 6.

The unending surge from all six litres of swept displacement feels like a powerboat rising out of the surf.

It’s creamy and unbroken, delivered in a relentless bottomless surge that goads you on after every corner just so you can hear the sonorous W12 bellow once more.

The 40/60 rear-biased torque split helps push you along too, keeping the car nice and balanced. 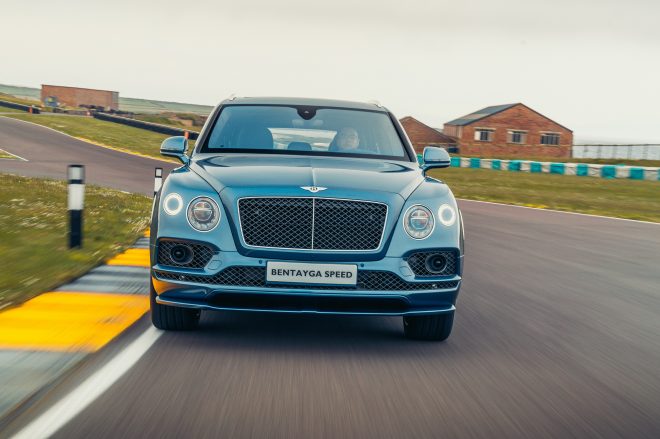 At turn 7, I slam hard on the brakes, with the carbon ceramics on our test model delivering fuss- and fade-free performance lap after hot lap.

Through slower corners, the Speed is biddable and goes around them without much fuss, but the W12 makes its presence known through the faster ones by pulling the nose wide.

But the sophisticated torque vectoring system quickly kicks in and nibbles away at the speed, bringing the nose back in line.

It helps to take the corners at about three-fifths, so the weight can shift forward and put some traction over the front. 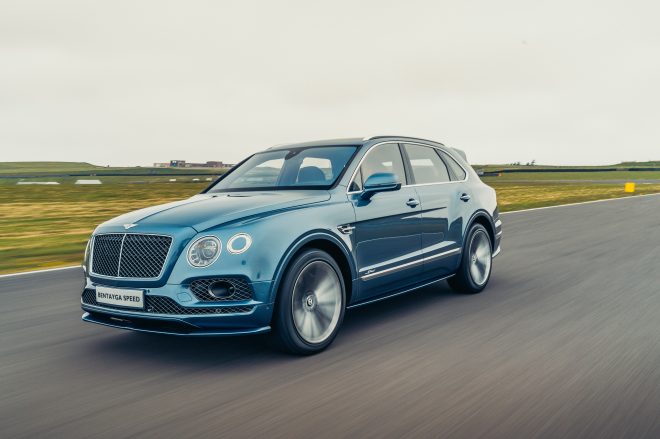 Any body roll is held impressively in check thanks to the 48V active roll system.

After my run, Guy and I (thankfully) swap places for him to take me out on a hot lap.

With so much opulence, being driven in a Bentayga Speed by a racing driver is like drifting Buckingham Palace.

He enters turn 7 at stomach-churning speeds, way quicker than what the car wants to do, but a dab of carbon-ceramic soon solves it.