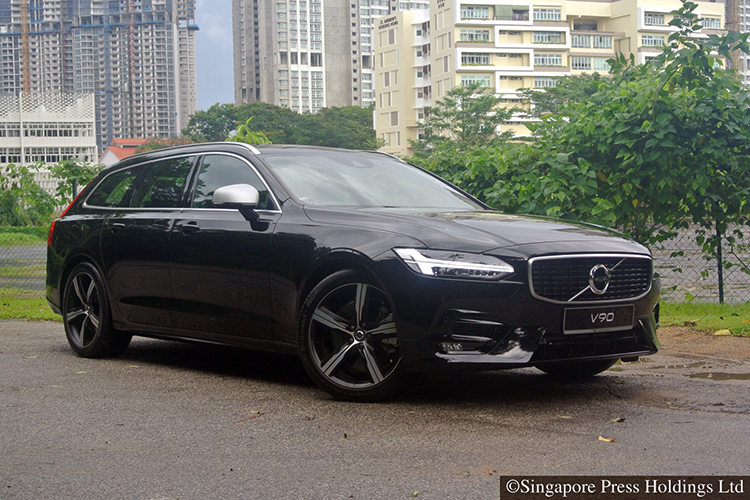 What does the Volvo V90 have to do with zombies, you might ask?

In the 2013 zombie action movie World War Z, the main character played by Brad Pitt drove a Volvo V70 estate through Philadelphia when the city was overrun by the undead.

Pitt’s on-screen family survived the attack, as well as multiple crashes in the V70.

I recalled having a slightly smug feeling after the movie.

At that time, my family car was the Volvo XC70 – the cross-country, all-wheel-drive version of the V70 estate.

I told my wife: “If there is a zombie apocalypse, we’re ready.”

I also made a mental note of the three qualities a car must have to survive a zombie bloodbath: the speed to outrun danger, lots of space for supplies and safety features to avoid and survive a crash.

The V70 was discontinued in 2016 and taking its place as the Swedish carmaker’s flagship estate is the V90, which was launched here in early 2017.

Thankfully, the V90 still ticks all the boxes in my “apocalypse car” checklist.

One, it is swift.

The version reviewed here is powered by a 2-litre engine, which is both turbocharged and supercharged.

Besides speed, the V90 has a massive boot.

I chucked a full-sized adult bicycle into the boot with rear seats folded down and the car looked like it had space for two more bicycles.

And finally, the V90 has all the safety features expected of Volvo cars.

Besides the usual collection of airbags and traction control systems, the V90 also alerts you when you stray out of lane markings.

It even slows down and stops the car when it detects a possible collision.

I was on the East Coast Parkway trailing a tipper truck when the truck braked suddenly. 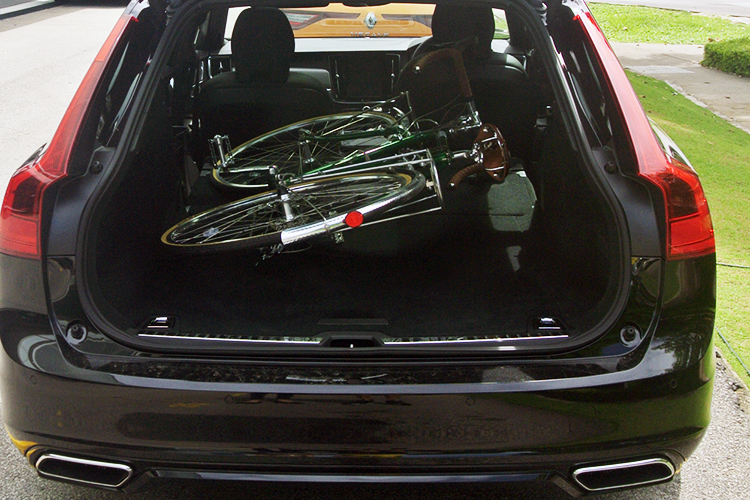 V90 boot can fit a full-sized bicycle with the rear seats folded down.

I braked too, but the V90 detected that I was not braking hard or fast enough, so it jammed the brakes for me, bringing the car to a stop with a disapproving chime.

Speed, space and safety are not the only impressive traits about the car.

The V90 shares the same mechanical DNA with its S90 sedan sibling, which was The Straits Times’ Car of the Year in 2016.

At 4936mm long, the V90 is a big car, but Volvo designers have softened its edges to hide its bulk.

It weighs a hefty 1.853 tonnes and is powered by a relatively modest 2-litre engine, so I was expecting a fuel guzzler.

But over a 120km drive (about 70 percent on expressways), it recorded a fuel consumption of 9.8km/L, which was not massively off the official figure of 13.5km/L.

Straits Times Car of the Year 2017

Less impressive was how the car drove around the series of tight bends in Neo Tiew Road.

The pronounced weight shifts of the long and heavy vehicle took some getting used to.

There are two other niggles.

One, after having test-driven almost the entire stable of Volvo cars, I still have trouble finding my way around the touchscreen menus of the infotainment system to adjust the various car settings.

Two, while the V90 packs an impressive package of safety aids, what ought not to have been left out was blindspot warning.

Straits Times Car of the Year 2016

While I advocate turning your head to check, there were at least two instances in the past two years where this manoeuvre failed to pick up a car and a motorbike lurking near me during heavy downpours.

In both instances, I was driving cars with blindspot warning, thankfully.

Overall, the V90 is a niche car with a short list of rivals.

This means the V90 monopolises the large continental estate segment in its price range.

Especially one which does not cost an arm or a leg.

5 things we love about the Volvo V90 Cross Country