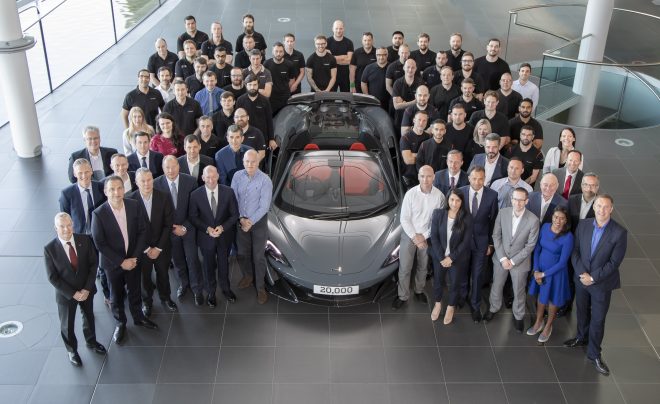 The 20,000th McLaren produced is a 600LT Spider in Chicane Grey, pictured here at the McLaren Production Centre in Woking.

Automakers have plenty of heritage to be proud of, and McLaren can add to that list with the production of its 20,000th car.

The 20,000th McLaren, a right-hand-drive 600LT Spider in Chicane Grey, was assembled at the McLaren Production Centre (MPC) in Woking, Surrey.

This milestone, probably something that a mass-market manufacturer could reach in months, comes nearly eight years after the first McLaren road car rolled off the MPC in July 2011.

It’s especially significant given that McLaren is a low-volume supercar manufacturer, which makes the 20,000 mark all the more noteworthy.

McLaren said that while production reached “just over 4,800” cars in 2018 to meet rising global demand, output will remain around 5,000 a year into the next decade.

After that, the automaker will increase its capacity to 6,000 before the end of its current business plan – dubbed “Track25” – in order to maintain exclusivity. 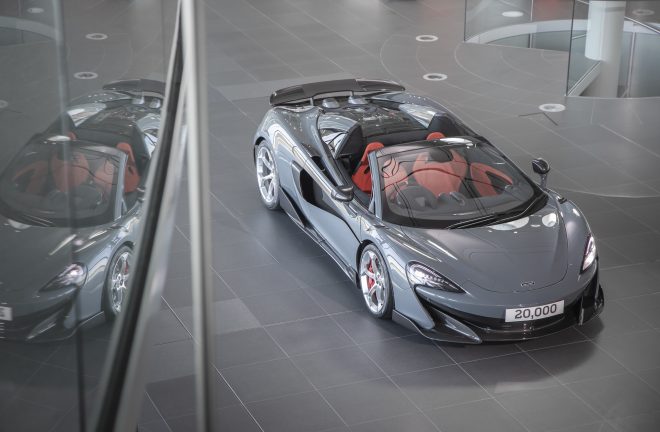 Over 90 percent of vehicles built in Woking are exported to more than 32 markets worldwide, the automaker noted.

“While demand for our products continues to grow, we aim to balance that to maintain exclusivity for our brand and our customers,” said chief executive Mike Flewitt.

“It is fitting that we celebrate this achievement with a 600LT Spider which has been a huge success for us with all production slots for the coupe variant now sold out.”

The 20,000th car being produced is a testament to the “hard work, dedication and commitment from our McLaren Production Centre employees that we’re now able to produce 20 cars a day across many different vehicle types and variants,” said chief operating officer Jens Ludmann.