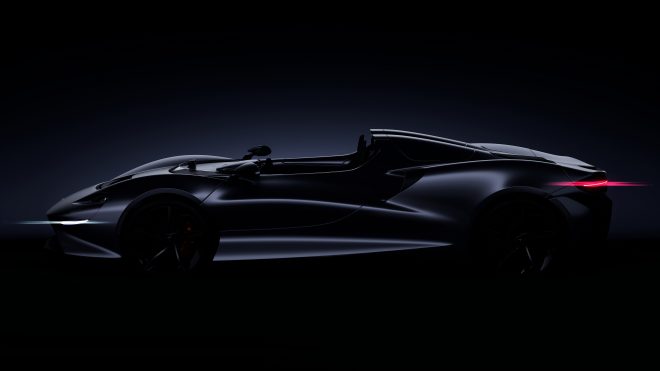 The new McLaren roadster promises to be the lightest car the British firm has ever built.

There’s a new McLaren and boy, does it look good.

The new McLaren roadster, which doesn’t yet have a name, will be focused on the “exhilaration of pure, open-top driving”, the company said.

It was announced at a customer briefing at the Pebble Beach Concours.

The model is a two-seat, open cockpit roadster that will be the latest offering in McLaren’s range-topping Ultimate series lineage of supercars that includes the P1, Senna and Speedtail.

The new McLaren roadster will be different to drive compared with the car’s mentioned above.

It will differ from both the McLaren Senna’s focus on being the ultimate road-legal track car and the Speedtail’s high-speed aerodynamic efficiency, McLaren said.

Instead, it will offer the “purest distillation of road-focused driving pleasure” and an “unrivalled sense of driver connection with the surrounding environment”.

Presumably, McLaren’s hinting that you might get stuff in your hair if you drive it down a dusty road, or bugs in your face.

The new McLaren will be more road than track-biased, but it will still be built on the company’s trademark carbon-fibre construction.

It will be the lightest car ever produced by McLaren Automotive, the firm says.

Powering the whole ensemble is a version of the twin-turbo V8 currently pulling duty in the McLaren Senna.

The unnamed McLaren roadster will be available “late 2020” and will likely be priced between the current £750,000 ($1.26 million) McLaren Senna and £2.1 million Speedtail.

Get those chequebooks out!

Get a supercar in Singapore for $30k